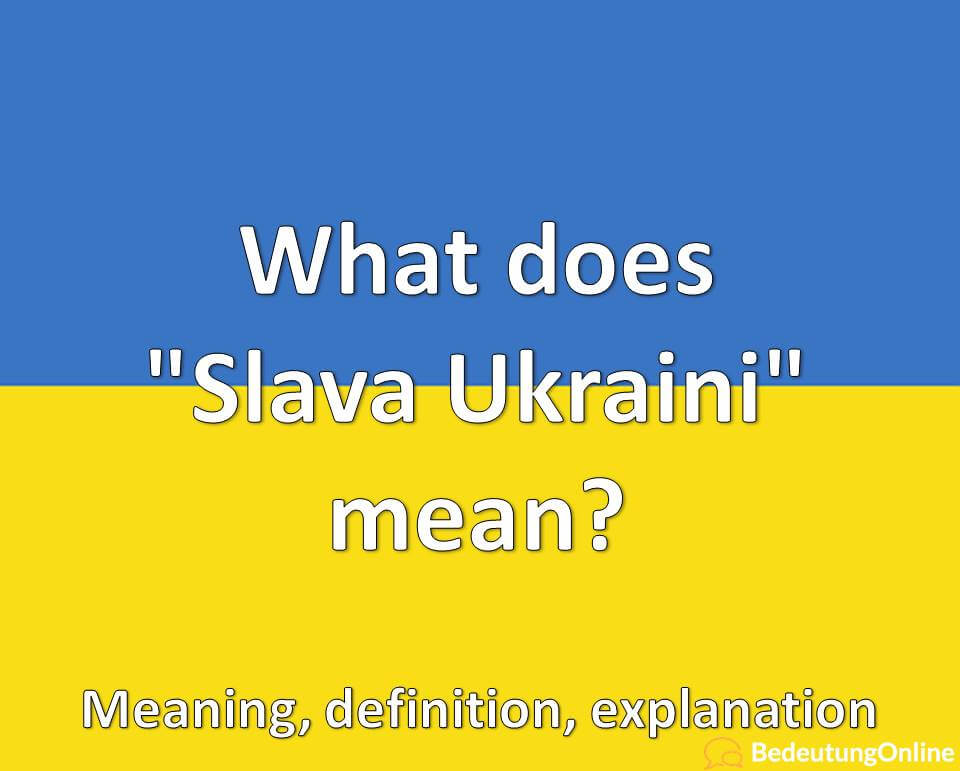 Literally, Слава means „glory.“ The slogan became international through Ukrainian President Selenskyj’s addresses to his people from the outbreak of war in February 2022, but it has always been a common greeting in Ukraine itself. The Ukrainian Armed Forces have been officially greeting each other with „Слава Україні, Героям Cлава“ (Glory to Ukraine and Glory to Her Heroes) since 2018.

The phrase has been known since 1840 at the latest, when the Ukrainian national poet Taras Shevchenko used it in a poem (До Основ’яненка = „For Osnovayenko“). Then in the late 19th century, the Ukrainian student community in Kharkiv used the slogan along with the addition „Glory to all the earth!“

Between 1917 and 1921, Ukraine fought a war of independence against the Bolsheviks, victorious in Russia, who were working on their Soviet empire and wanted to dominate Ukraine in the process. Ukrainian partisans greeted each other with Slava Ukraini. One of them, the writer Yuri Horlis-Horskyj, later described that partisans always answered the usual greeting „Good day“ with „Slava Ukraini“. The Cossacks of the region, who were bitter opponents of the Bolsheviks, supplemented the greeting with „Kosakam Slava!“ (Glory to the Cossacks!). This greeting is said to have been even widespread together with „Glory to the Hetmanate“ and „Glory to Ukraine“ from the 16th century. The Hetmanate was a Cossack and Tatar territory in the region of today’s Ukraine between the 16th and 18th centuries.

After the end of the unsuccessful War of Independence against the Boschewiki and the annexation of Ukraine to the Soviet Union as the „Ukrainian Soviet Socialist Republic“ from 1922, Ukrainian nationalists appropriated the expression Slava Ukraini, which they in turn associated with „Glory to the Cossacks“. From 1939, the OUN (Organization of Ukrainian Nationalists) adopted the slogan. This organization fought against both German and Soviet forces during World War II, against the latter as late as 1952, after which it was defeated, Ukraine remained a Soviet republic, and the Soviet power subsequently banned the slogan Slava Ukraini. Important to know: The OUN fighters were not orphans. Like the German and Soviet troops, they also committed war crimes. However, they were not fascists, albeit anti-communists, but simply nationalists. This movement still lives in Ukraine today. It invokes the tradition of the Cossacks, which continued after 1952. In 1957, for example, the Ukrainian author Mychajlo Stelmach took up the slogan again in a novel and at the same time called for defending the Cossack glory that existed in Ukraine. His book was not banned by the Soviet authorities, but mistranslated into Russian in order to soften the nationalist tendency. In this regard, it is important to know that in the entire Stalinist dominion, including the Eastern bloc countries (including the GDR), nationalist tendencies were tolerated to a certain extent because the communist rulers assumed that they could not be completely suppressed. The GDR, for example, therefore allowed the block party NDPD (National Democratic Party of Germany), in which rather right-wing conservative ideas gathered. Nevertheless, the communists made sure that these ideas did not get too much space.

This was particularly important in the multi-ethnic Soviet Union. When now in 2022 Vladimir Putin repeatedly speaks of „Nazis“ in the Ukrainian government, he invokes the fact that the current Ukrainian government under Selenskyj uses the slogan Slava Ukraini quite offensively and thus takes up a nationalist tradition. However, the slogan has nothing to do with fascism (Nazis), but with nationalism.

It is no wonder that the post-communist Putin docks here: It is a tried and tested method of the communists to defame all their opponents as anti-communists and at the same time as Nazis, because the history of the 20th century can be read as a great conflict between communism and fascism. According to this, all anti-communists are automatically Nazis. This was also tried in the GDR: There, for example, people liked to put right-wing conservative politicians like Franz-Josef Strauß (CSU) in the Nazi corner. But this is wrong. The more important line of conflict is (and was during the Second World War) between democracies and extremist ideologies such as communism, fascism and, for some decades now, Islamism. Nationalists are not ideologues, even if they sometimes resort to extreme methods in their quest for freedom. They simply uphold their historically evolved nationality.

Renaissance of Slava Ukraini from the late 1980s onwards

In 1985 Mikhail Gorbachev became General Secretary of the CC of the CPSU, and in 1990 he finally became President of the Soviet Union. Already as General Secretary he had great influence. He ushered in the end of classical communist rule, for which Eastern Europe (including East Germany) thanks him wholeheartedly and the rest of the world at least admires him, while in Russia he has many opponents (including Vladimir Putin).

Gorbachev loosened the iron reins of the Soviet regime back in the late 1980s, which allowed nationalist aspirations to gain strength in the Soviet republics. Since then, the slogan Slava Ukrajini has been openly heard again in Ukraine. It soon became a rallying cry at demonstrations, but it was also taken up by intellectuals, such as the human rights activist Vyacheslav Chornovil at a rally in 1989. Ukraine was then still ruled by pro-Russian President Leonid Kravchuk, who in the early 1990s wanted to join the Union of Sovereign States initiated by Russia. Many Ukrainians protested against this starting in 1991, chanting „Glory to Ukraine,“ to which they added „Shame to Kravchuk.“

Finally, in 2004, the pro-Russian Viktor Yanukovych came to power in a blatantly rigged presidential election. Ukrainians protested powerfully against this („Orange Revolution“). Their opposition leader, Viktor Yushchenko, addressed the protesters with Slava Ukraini, to which he added „Glory to our God, glory to each of you!“

After Yanukovych refused to sign an association agreement with the EU in 2013 under Russian pressure and probably also out of his own conviction, protests began that went down in history as the „Euromaidan“ because their center was Kiev’s Maidan Square, and in which the slogan Slava Ukraini played a very decisive role. There were also many fatalities among the demonstrators, but they did not give up and eventually managed to get Yanukovych deposed and fled to Russia. A transitional government emerged from 2014, later a government under billionaire Petro Poroshenko, and from 2019 Volodymyr Selenskyj ruled after regular elections. He, too, took his cue from Slava Ukraini, albeit not very offensively at first. He had to contend with hard facts: there was a war in the Donbass against a breakaway population of Russian origin, and Crimea had been annexed by Russia in 2014. The sword of Damocles of a Russian invasion had been hovering over the country practically since 2014. When this finally began in February 2022, Selenskyj recalled the slogan Slava Ukraini, which, at least since the Euromaidan, has stood for the aspirations of the Ukrainian people to self-determinedly advance their ties to the West in order to be able to exist as a democratic, liberal constitutional state.

It should be noted, however, that the slogan does not lose its nationalist connotation because of this. This is perhaps necessary, because in Ukraine, where many people with Russian roots live, there is a need for a strong national self-image. A census in the early 2000s identified 77.8 % Ukrainians in the country, followed by 17.3 % Russians. In addition, there are more than 100 other ethnic groups. Now that Putin has unleashed a real war against the large neighboring country of 44 million people, Slava Ukraini has become the battle cry par excellence for Ukrainians‘ desire for independence and freedom. That is why Selenskyj ends each of his heroic speeches from surrounded Kiev with this slogan (as of March 9, 2022).

In Ukraine, Slava Ukraini has been a widespread form of greeting among democratically-minded citizens who make up the vast majority of the population (including many people with Russian roots) since as early as 2013. The slogan has stood for these values ever since:

The addition „Glory to the heroes“ also received a new content. Since the Euromaidan, it has stood for those activists who lost their lives fighting the Yanukovych government. There were, after all, more than 100 deaths from police violence at Euromaidan on February 18, 2014 alone: even snipers had fired into the protesting crowd. In Ukraine, these heroes have since been called the „Heavenly Hundred.“

Today, Ukraine’s legislation is influenced by the ideas of the Euromaidan. This became a founding myth of modern, Western-oriented Ukraine. With the Slava Ukraini now used in warfare, a new, even deeper myth is establishing itself, already based on roots: Since about 2015, all official speeches in the country have obligatorily ended with Slava Ukraini. The Ukrainian national soccer team wears the slogan on its jerseys. Even internationally, it has been known for some time.

Even heads of state of other countries use it. In 1995, for example, then-U.S. President Bill Clinton gave a speech welcoming the fact that Ukraine had turned away from the Soviet Union and at the same time disarmed nuclear weapons. His speech ended with „God Bless America“ and „Slava Ukraini.“ Canada’s Prime Minister Justin Trudeau greets Ukraine with these words every year on Independence Day, and former German Foreign Minister Sigmar Gabriel has also used them on ceremonial occasions. The President of Lithuania, Dalia Grybauskaitė, followed suit in 2016.

What is right for politicians, some athletes found only cheap: Croatian professionals Domagoj Vida and Ognjen Vukojević, both former players at Dynamo Kiev, greeted Croatia’s victory against Russia in the quarterfinals of the 2018 World Cup in Russia with „Slava Ukraini“ and were subsequently warned by FIFA after protests from Russia. This incident already showed at the time that Slava Ukraini today stands above all for the emancipation of the country from its large, overpowering and expansionist neighbor.