The „Green Line Test“ supposedly says something about the dynamics of a couple and is supposed to indicate who is the dominant part in the relationship. For this, the posture of the two people is determined by means of a green line and thus a statement is made about who is dominant and who is rather weaker in the relationship.

Whoever leans more towards the other is said to be the weaker one in the relationship. In the picture, this would be the woman. 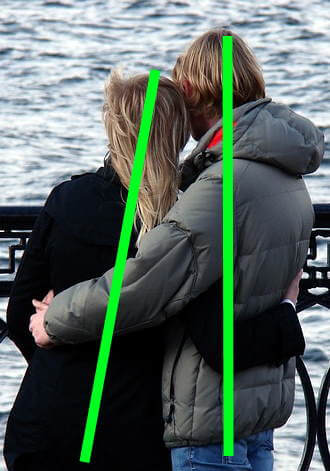 How does the „Green Line Test“ work? Explanation

For the „Green Line Test“ a joint photo of a couple is analyzed. A green line is drawn across the posture of each person. This should show how the two people relate to each other – both figuratively and metaphorically.

Now one looks at the two lines and their relationship to each other and can read from this how the dynamics of the two people look in the relationship.

If one follows this theory, it would mean that men who lean toward their partner in pictures are needy, inferior, and emotionally dependent on their partner. In photos where the woman is standing up straight, on the other hand, she thus radiates that she is stronger, more independent, and more confident than her partner, according to the „Green Line Test“ theory.

How accurate is the „Green Line Test“ really?

Especially in today’s world, where equality is writ large and men in particular are encouraged to show emotion and authenticity, such theories can be difficult in some cases.

In addition, the position in which couples present themselves in photos is often posed and thus not genuine. For example, the taller person often leans against the shorter one to bridge the size difference and signal closeness.

Nonetheless, a couple’s body language when interacting with each other can be an indicator of the dynamics or quality of a relationship. However, a single photo is rarely sufficient to make qualified statements about this. For this, one would have to experience the couple with each other over a certain period of time. Only then can a statement be made about the role relationships within the relationship. In addition, very few relationships are static and unchanging. For many couples, the relationship changes depending on the situation or stage of life, which can additionally affect the accuracy of the „Green Line Test“.